It's sunny as you look out the airplane window, you check the weather at your destination and all looks great too, but the pilot says you're waiting for clearance from Air Traffic Control to take off. What gives?

Several factors limit the rate at which flights can land safely at an airport, including visibility, wind gusts and wind direction, cloud ceilings, on so on. The Air Traffic Control system in the United States manages these conditions through Ground Delay Programs (or GDPs). During a GDP, flights headed to an airport with reduced landing capacity are held on the ground at their origin airport (hence the term ground delay). This prevents flights from taking off too early and queuing in the air near the airport, which is more expensive and less safe.

Lumo has always predicted GDPs as one of our inputs to our delay prediction algorithms, and now we're making our GDP predictions available through APIs.

A GDP can be caused by many factors – winds, visibility, cloud ceilings, ice/snow, thunderstorms, or even just too many aircraft wanting to land (Aspen airport typically has very few GDPs, but we see volume-related GDPs during ski season).

Some GDPs are easier to predict than others. A forecast that calls from snow in Atlanta, or one that calls for low visibility at SFO, are likely to result in GDPs.

Here's an example of an advisory from a few days ago. At 1630 (UTC), the FAA operations plan shows a possible GDP or ground stop at DEN, EWR, TEB, and LGA. It's hard to tell what the actual probabilities are, or whether all four are equally probably. 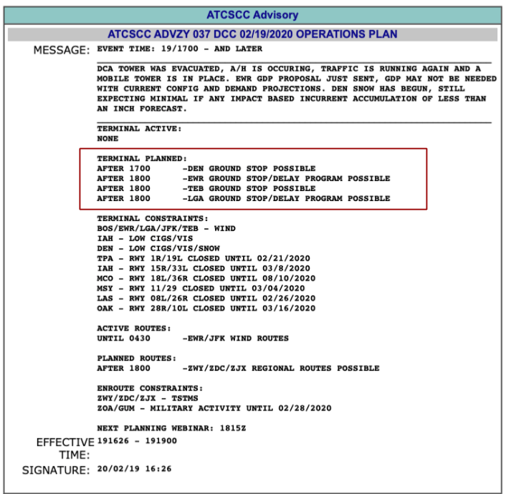 Here's what Lumo was saying at that time. Newark has a higher likelihood of a GDP (~50-60%), LGA Is lower, and DEN is quite unlikely. 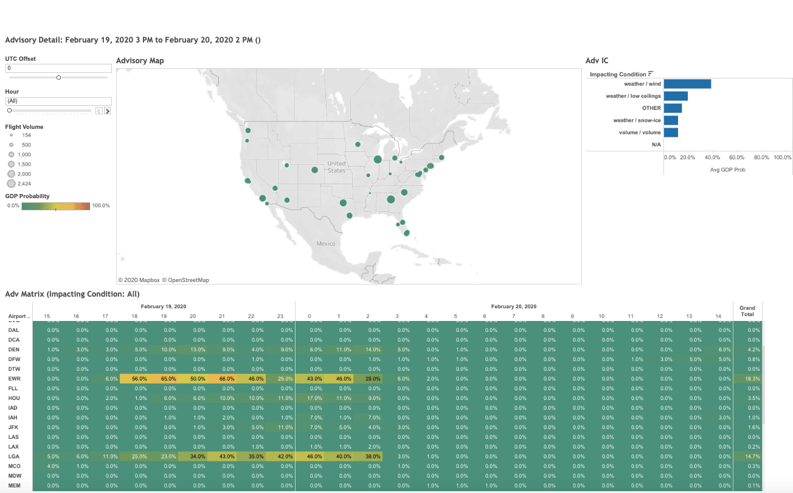 Lumo not only predicts the likelihood, but the arrival rates as well. For example, at 2100, Lumo shows that while there are 45 aircraft scheduled to arrive during this period, the capacity is likely to be 34 aircraft/hr and the FAA is likely to call a GDP with a rate of 38/hr. 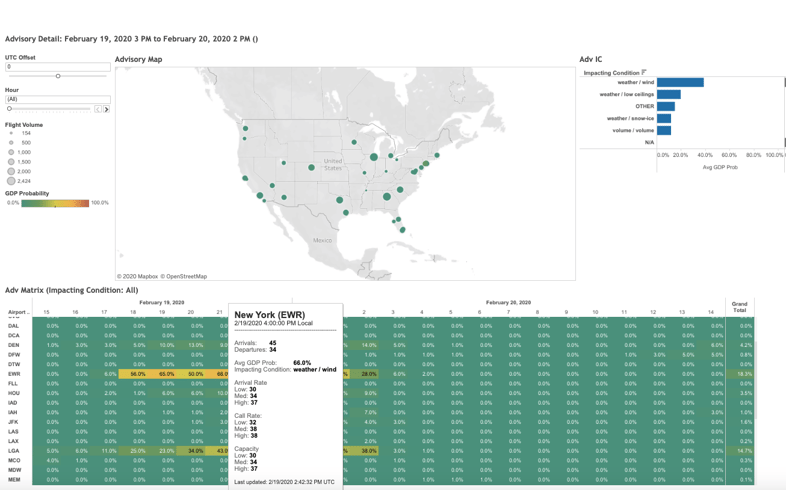 Drilling down to EWR shows the likelihood by hour, the period when demand exceeds supply, and the impact on flights (in this example, limited to United's flights).

Sure enough, a GDP was called at EWR from 1800 to midnight, and there were no GDPs at either LGA or DEN.

In fact, Lumo had been calling the 1800-0000 GDP almost 24 hours before it actually happened. The chart below shows our predicted likelihood over time (the rightmost column – Lumo's prediction 24 hours out showed that Lumo had a ~50-70% likelihood of a GDP starting at 1800).

If you are at an airline, airport, or other operations center in the US interested in getting a live feed of our GDP/GS predictions, either via a dashboard or through APIs, get in touch with us. We'd love to chat!