Wondering if thunderstorms might delay your flight? Lumo's predictions can help

Whether you're a seasoned road warrior or the occasional traveler, flight delays can get in the way of a good trip. At Lumo, we make sure that our flight delay predictions keep you a step ahead of delays, and our real-time updates keep you updated as events unfold.

Predictions sound great in theory, but what do they look like to a traveler or arranger/manager? Here's a sequence of alerts we sent this past weekend that predicted delays caused by thunderstorms at Chicago O'Hare, keeping the traveler informed throughout their journey.

The traveler was flying from New York LaGuardia to O'Hare on an early evening flight. Lumo sent out an alert the previous evening that there was a high risk of delay, assigning the flight a delay risk of 6 (on our 1-10 scale). Lumo sends out alerts to the traveler via email, slack, or through our mobile app, and if you are a corporate customer, can even send alerts to a travel manager or arranger who is monitoring your flights.

There was an estimated 25% likelihood of a 1-2 hour delay and a 25% of a 2+ hour delay. Lumo's AI algorithms also determined that the delay was going to be because of airport conditions at O'Hare. Imagine your personal mobile assistant telling you that if you really wanted to be in Chicago for that dinner meeting, there's a 50% chance that you're probably going to miss it. 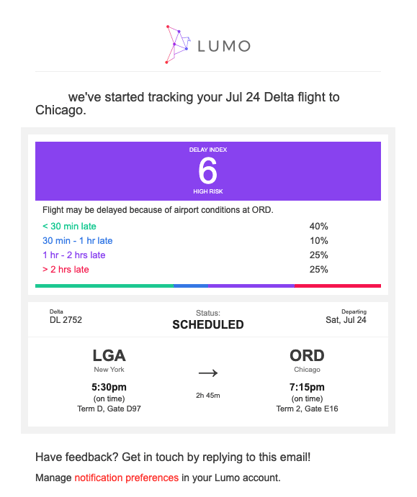 Lumo sends our an alert about the date and terminal information (as you would expect any real-time monitoring service to). We source our real-time data from OAG, an industry leader in flight data.

Lumo also suggests potential alternatives on your airline, other airlines, and even nearby airports with a lower risk of delay. It's up to the traveler now if they want to take that 50% risk or move to another flight. 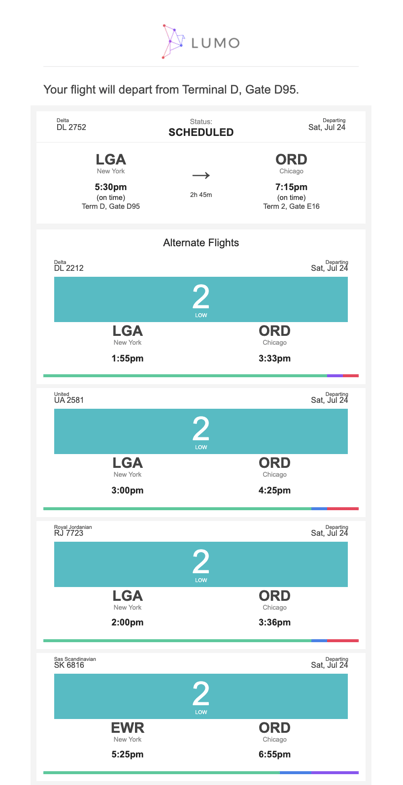 Lumo alerts you that your aircraft is on its way – it's one less thing to worry about if you know that your inbound aircraft is on time. It's our way of keeping you informed so you don't have to check where your aircraft is (and we'll let you know if it's been delayed). When you track a flight with Lumo, you're not only tracking your flight but all upstream flights as well, so you'll be the first to know when an upstream delay might cascade into your flight.

Here's where it starts to get interesting. Lumo keeps track of FAA Air Traffic Control data to let you know that the FAA has instituted a Ground Delay Program (where constraints at the destination cause aircraft to be delayed at their origin), which is likely to impact your flight. The delay index of 6 holds steady with a 50% chance of at least a 1-hour delay. At this point, you've probably decided you're going to stay on this flight but you might want to get on standby on another one if it's available. 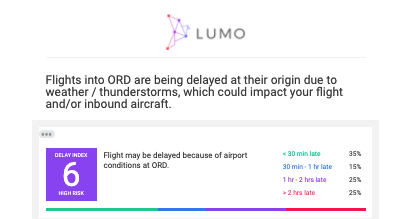 Yay, your pilot says it's time to board and you push back from your gate. Lumo sends you alert while you're taxiing that you're definitely going to be more than 2 hours late (no, really?) and that the FAA now has a Ground Stop in effect (flights aren't allowed to depart for ORD until things clear up). OK, you can put that phone in airplane mode now and get some sleep. It's going to be a long night.

The flight ended up being 3 hours and 4 minutes late.

Now imagine if you didn't have Lumo in your corner: you would have shown up for your flight, been delayed, then delayed again, then some more. A traveler armed with Lumo, on the other hand, would have known about the delay the previous evening with plenty of time to look for alternatives and stay informed. That's the power of AI.

Download the Lumo app and start your free trial today!